The research reveals the total volume of clicks on search ads rose by 11 per cent from Q2 in 2013, while total impressions have fallen by six per cent and click through rate is up by 17 per cent.

“The data shows a healthy paid search market in EMEA, with advertisers enjoying increasing revenue from their advertising through more efficient campaigns,” said Justin Thorne, regional marketing director for EMEA at Kenshoo. “Advertisers’ confidence in the paid search channel and strong demand for keywords means the price of search advertising has continued to rise – reaching a cost-per-click (CPC) of €0.43, up from €0.38 in 2013.”

“The increased share of spend and clicks taken by mobile could in part be due to the success of Google’s enhanced campaigns which simplifies the process of creating Google AdWords campaigns.

Since migration to enhanced campaigns, search advertisers no longer have to run separate campaigns targeting desktops, tablets and mobiles – all devices can be served with ads within the same campaign, making it much easier to target mobile devices,” suggested Thorne.

The UK also found that 38 per cent of all paid search clicks during the quarter came from mobile. 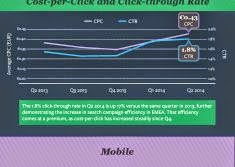