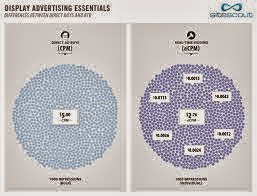 The low costs of electronic communication reduce the cost of displaying online advertisements compared to offline ads. Online advertising, and in particular social media, provides a low-cost means for advertisers to engage with large established communities.Advertising online offers better returns than in other media.

Standard Adserving for Cost Per Impression,

The Standard Adserving of your content mostly 50%  for publisher  share and 50% for advertiser spent cost equation, But for google adsense ad serving cost is not equal ,  Just example your current Page CTR – or click through rate is 8.06%.

As a publisher, you’ll earn revenue each time a CPM ad is served to your page and viewed by a user. CPM ads compete against cost per click (CPC) ads in our ad auction, and we’ll display whichever ad is expected to earn more revenue for you.

An ad impression is reported whenever an individual ad is displayed on your website.
Different ad formats will display varying numbers of ads; for example, each time a vertical banner appears on your site, you’ll see two ad impressions in your reports. In addition, keep in mind that the number of ads in any ad unit may vary depending on whether the ad unit is displaying standard text ads, expanded text ads, or image ads.